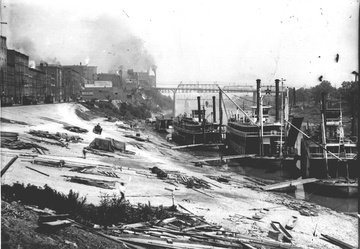 Riverfront Ca. 1900 - Courtesy of TSLA
The Riverfront was the gateway for many travelers to enter Nashville and a large number came to enjoy the city's saloons. It was recalled in the oral history of a timber rafter that most of his trade "would buy whiskey, [and] a lot of them would get drunk before coming back [to the countryside]. some of them would get in jail."
However, the Cumberland River in Nashville was most known as the home of a fleet of steamboats run by Captain Tom Ryman. Each steamboat had a bar on board until Ryman was supposedly converted by famous preacher Sam Jones in 1885. Afterward, liquors on Ryman's boats were thrown overboard and a saloon he owned near the riverfront was converted into a religious meeting place.
Sources
Henderson, Jerry, "Nashville's Ryman Auditorium," Tennessee Historical Quarterly 27 (Winter 1968): 305-28,
Kyriakoudes, Louis. The Social Origins of the Urban South: Race, Gender, and Migration in Nashville and Middle Tennessee, 1890-1930. Chapel Hill: University of North Carolina Press, 2003.