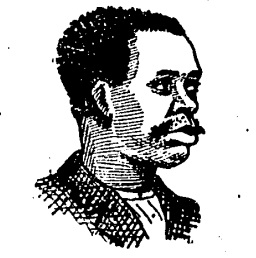 Joe Watson in 1887 issue of Nashville Daily American
Jo Watson was one of the most successful African-American saloon entrepreneurs in Nashville. He ran saloons both south and north of Downtown Nashville as well as a restaurant and coal supply business. At his South 4th Avenue location, in front was a cigar store. Next to it was a whiskey saloon, “the bar over which is sold, for five cents per dram, intoxicants that it is said will madden an ordinary brain in the few minutes.” Parlors were in the back for “card playing, social drinking, cock fighting,” and likely other forms of gambling. Newspaper reports of Watson's place like with every African American saloon were not complimentary. A Nashville Daily American reporter  described the clientele he saw as forty African American “river roustabouts and thieves. They were sitting around playing cards, with drinks in front of them.”
Source
“Black Bottom: A Saturday Evening in a Terrible Section,” Daily American, February 6, 1887, 4. Proquest (Document ID 939932908).